The 2018 Dietetic Internship Preparation Workshop (DIPW) was held on Saturday, October 13th.  The DIPW this year was the largest it had ever been and held for the first time in the beautiful Hildebrand Equine Complex.  Over 200 students from across the state came to the DIPW.  Students had the opportunity to hear from six different RDs with varying specialties, ranging from clinical to research experience.  The Dietetic Internship (DI) Programs Fair was the largest it had ever been, with 19 different programs represented.  The fair gave students the opportunity to meet the program directors, network with them, and learn more about their internships.  Students also received a spiral created by the planning committee and listened to a presentation from Mrs. Karen Beathard about the internship matching process.

During the month of a July, a group of seven Food Science undergraduate and five Food Science graduate students embarked on a high-impact study away course in San Antonio. Better known as Study Abroad Texas-Food Science, this course allows students to connect and apply their knowledge of food chemistry, food processing, food safety, nutrition, and product development to real world applications in production of safe, nutritious and quality foods. The study away course also allows students to network with food industry professionals so that students can discuss future job opportunities and gain insight into professional growth as a food scientist.

Thanks to the generous support of a donor and the partnership of employees at host companies, the students were immersed in food processing facility tours and hands-on demonstrations and modules at C.H. Guenther and Son, Inc., FGF Brands Texas (formerly Hill Country Bakery), H-E-B, Central Market, and the Spoetzl Brewery.

Students toured the Spoetzl Brewery and learned how the application of food microbiology, food engineering, food chemistry, quality assurance, and packaging intersect to ensure a consistent, refreshing Shiner beer product for all consumers.

Yagmur Yegin, a doctoral student at Texas A&M University was selected to receive the following awards in the year 2017.

The scholarship is sponsored by Peanut Proud, Inc. to reward a selected U.S. graduate student who recognizes the importance of food safety and desires to help build the confidence of consumers by insuring the best quality food. Ms. Yegin was invited to International Association of Food Protection (IAFP) Meeting 2017 in Tampa, FL to receive her award. The Peanut Proud Scholarship awards the selected student a $2,000 cash prize and covers all expenses to attend the IAFP Meeting.

FIRST is a five-day, all expense-paid professional conference held on September 17-21, 2017, in Cincinnati, OH sponsored by The Procter & Gamble Company. FIRST is a very competitive conference to be selected, which gives a great insight about challenges, career opportunities, and expectations in industrial research. Selected participants learn about R&D at P&G, and understand the important parameters essential to succeed in a technical career in academia, private sector, or government.

Yagmur Yegin is currently a Ph.D. student under supervision of Dr. Alejandro Castillo in the Department of Nutrition and Food Science at Texas A&M University. She holds a B.S. degree in Food Engineering from Celal Bayar University-Turkey, and an M.S. degree in Biological and Agricultural Engineering from Texas A&M University. Yagmur`s research interests are focused on various fields including nanotechnology applications in food safety, controlled release of active ingredients in food systems, synthesis and characterization of antimicrobial nanoparticles, and effect of surface chemistry and topography on bacterial attachment. Additionally, Yagmur is also a Certified Food Scientist (CFS).

Congratulations on your achievements Yagmur. Gig’em!

COLLEGE STATION – A study that began with messy diapers is helping scientists understand how nutrition helps babies grow into healthy children, according to a Texas A&M AgriLife Research nutritionist.

Because scientists cannot physically examine the infant intestines, a team of U.S. researchers analyzed fecal samples from several groups of infants – from premature to full-term babies – to get a molecular “fingerprint” on how they were developing in relation to breast milk or formula consumption.

“This study is a proof-of-principle that we can noninvasively monitor the biology of the intestine and the immune system in these highly premature infants and full-term infants in order to unravel the developmental processes that are just fine in the healthy babies, but in the premature babies, are not going along very well,” said Dr. Robert Chapkin, a principle in the study at AgriLife Research and a distinguished professor at Texas A&M University.

He said the purpose of such information would be to optimize treatments given to help babies.

“After all, every mother and father want the healthiest baby possible. They want a baby that thrives. They all want brilliant babies,” he said. “A lot of these developmental processes impact neural development and other components. We know enough about biology now that if there are serious disruptions in the early developmental process, they can have impact for the entire life of that human.”

Noninvasive diagnostics is a concept Chapkin and the team have been fine-tuning for more than a decade.

“We developed the first generation of this technique 15 years ago to allow us to look inside the intestine of newborn human babies,” Chapkin said. “Newborn babies have all kinds of complications either because of premature birth or shortly after birth they develop digestive problems.

“The intestine is also very important because at the time of birth, it is a point where the human body becomes populated with microbes,” he said. “Prior to that, the baby’s intestine is almost sterile.”

The food taken in by the baby drives the populations of microbes that begin to flourish in the body as a part of what Chapkin called “normal biology that has been operating in humans for thousands of years.”

A new factor, however, entered about 40 years ago when infant formula was introduced to the market, he said.

“So then there became the question as to whether formula is optimal nutrition, or does a baby that is breast-fed have an advantage?” Chapkin said, a notion that is debated among formula manufacturers and nutritionists. 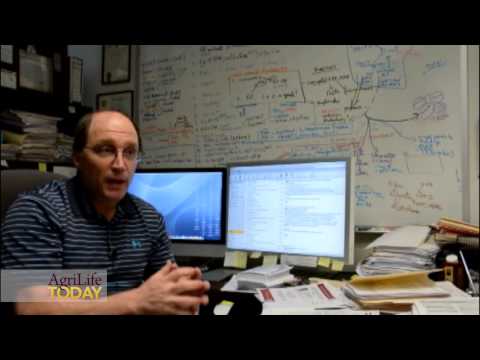 But Chapkin said the larger question is, “how do you characterize the impact of nutrition on a newborn baby?

“Newborn babies, especially if they’re healthy, can’t readily be biopsied and it’s hard to even get blood samples,” he said. “So that was really a part of our goal — to develop a noninvasive technique for assessing the biology of the human intestine – the site of microbial development because of the evolution of the growth process in babies.”

“All of these threaten the viability of the children,” Chapkin said.

With a team of experts from around the U.S., the researchers looked at highly premature babies in neonatal intensive care units and at two sets of healthy, full-term babies – one set fed exclusively breast milk and the other formula for the first three months of their lives. Fecal samples from all of the babies were analyzed.

“So with this diverse range of babies, we used our non-invasive diagnostic which isolates genetic material from the cells that are actually passed out in the fecal stream,” Chapkin said. “We capture the RNA, or ribonucleic acid, from those cells and do ‘deep sequencing,’ which means we sequenced the signature of the RNAs in that material.”

That enabled the scientists to “pull that signature out and analyze it,” he said. “We then took the data set and asked what genes are there, what are these babies’ intestines actually producing in terms of gene expression. The whole idea is we can take these genes and use them basically like a map – a constellation – in order to determine how the baby’s biology is changing over time.

“Nobody has done this before because it is difficult to gain access to a baby’s intestine,” Chapkin added. “With our method, we could sample a baby’s intestine everyday if we want because all we need is a stool sample.”

Chapkin credited the collaboration of researchers as being able to accomplish the work – including Dr. Camilia Martin, who works with premature infants at the Harvard Medical School, and Dr. Sharon Donovan, who works with infant nutrition at the University of Illinois-Champaign. Dr. Ivan Ivanov at Texas A&M University provided expertise in computational biology to help decipher and interpret the complex gene signatures.

“The window that we’re operating in is critical for understanding the optimal development of the baby,” he said. “What is the optimal nutrition these babies should get and how do we impact that?”